Now commonly referred to as automated, can be used wherever there is a need for powerful lighting which must be capable of rapid and extreme changes of mood and effects. Moving heads would, therefore, be inappropriate in a setting which does not require strong lighting (such as a home) or where the “quality” of the light required does not vary excessively (although it may need to be very strong for a venue like a stadium).

Naturally, there are exceptions to this rule, most notably the use of large numbers of moving heads for international sporting events, such as the Commonwealth Games or Olympic Games, where many thousands of separate automated fixtures are often used to light the opening and closing ceremonies. The 2008 Summer Olympics, in Beijing, had a rig of around 2,300 intelligent fixtures which is “the largest single automated lighting system ever assembled for a single event”.

Passive use of automated lighting involves utilizing their versatility to perform tasks which would otherwise require many conventional lights to accomplish. For example, six to eight moving heads can create a textured blue “night” effect on the stage floor while applying amber light to the actors during one scene – this can create a sensation of dusk or night. At the flick of a switch, the fixture can change to an animated red “fire” effect for the next scene. Attempting this transition with traditional lighting fixtures could require as many as thirty instruments. In this circumstance, the automated fixtures are not doing anything that could not be achieved using conventional fixtures, but they dramatically reduce the number of lights needed in a rig. Other features of automated fixtures, such as rotating gobos, are also possible with conventional fixtures, but are much easier to produce with intelligent fixtures.

Active use of automated lights, suggests that the luminaire is used to perform tasks which would otherwise require human involvement, or be simply impossible with conventional fixtures. For instance, a number of moving heads producing tightly-focused, pure white beams straight down onto the stage will produce a fantastic effect reminiscent of searchlights from a helicopter (especially if a smoke machine or hazer is used to make the beams visible). 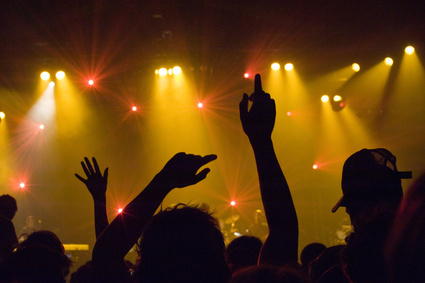 To recreate such an effect without intelligent lights would require at least one human operator seated directly above the stage with a follow spot, which would generally be considered to be too expensive for such a small effect. Moving head fixtures are often divided into spot and wash lights. They vary in use and functions but many companies offer profile and wash variants of the same model of light. Profile lights generally contain features like gobos and prisms, whereas wash lights have simpler optics and a wider beam aperture resulting in wider beam angle, which may be altered by internal lenses or “frost effects”. Wash lights are more likely to have CMY colour mixing although it is common for high-end spot lights to have such features too. Spot units are generally used for their beam effect (usually through smoke or haze) and the ability to project texture, whereas wash lights tend to be used for providing a stage wash.